Zest Bistro closed its doors for business in October 2015, shortly after this blog post.

Here’s the dish! After living in Southeast for a year, I’ve become obsessed with Barracks Row. I tend to patronize Alexandria a lot, just because I can get my city and suburbia living all on Route 1, but I was recently reminded about this very happening scene in Southeast. A few Sundays ago, I met a friend for brunch at Zest Bistro (located at 735 8th Street, SE, Washington, DC 20003), and I had an enjoyable experience there. Zest Bistro boasts a quaint, little patio and larger open-concept dining room, which, as you may know, I’m a huge fan of. I was a bit surprised when I arrived for our 1:30 p.m. reservation, and the restaurant was nearly empty (maybe only 10 other diners there at the time). My experience has been that when a restaurant is empty, usually the food or service (or both) isn’t that great. I definitely would not put Zest Bistro in that category of restaurants, but it was not the bustling brunch scene I’ve grown accustomed to in the D.C. area.

As I waited for my friend to join me, I used this time to ask our server, Matt, about some things on the menu—primarily grits. While Matt was a Midwesterner (someone whose opinion of grits I normally would not trust), he had spent some time in Savannah, Ga., working at a restaurant where he ate grits daily, which immediately upped his grits street cred. After our pretty length conversation (about 5 minutes talking about grits alone because they are that serious to me) in which I learned their grits were probably a bit more thicker than I like mine, I narrowed my choices down to to the Chorizo Breakfast Tacos ($11.95) and the Chesapeake Benedict ($15.95). 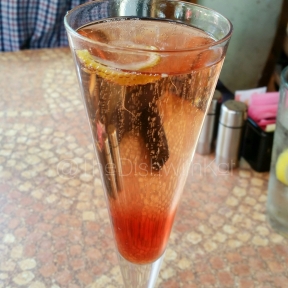 Matt mentioned that he thought the portion of the tacos was a bit on the smaller side, and because of that, he always ordered a side of grits with that entree. Since I had already decided not to go the grits route, I ordered the Chesapeake Benedict, which features very moist lump crabcakes, poached eggs (which I substituted for eggs over easy), toasted sourdough bread and is served with applewood smoked bacon, spinach and basil hollandaise, homefries, and fruit salad. I also ordered the Crimson Fizz ($7), which is a delicious concoction of pomegranate juice, Cava sparking wine, and grenadine and nice contrast to my traditional brunch beverage, the mimosa. My friend ordered the Zest Breakfast ($9.95), which includes eggs anyway you like them, applewood smoked bacon, homefries, toast, and fruit salad, along with a Spicy Bloody Mary ($8), which indeed had a kick.

A patio table for two

I consider myself a professional bruncher, and while the food at Zest Bistro was good, I didn’t find myself overly ecstatic about it. Their patio and open dining room with views of the kitchen were probably what most excited me about the dining experience, in addition to the fact that it’s probably the only brunch I’ve ever attended where I didn’t have to wait for a table. Their service was excellent, which I would expect from a restaurant that isn’t bustling during a weekend brunch. Our server was very attentive, and while I waited for my friend, two other people who weren’t our serve came over to check on me.

I have a few theories as to why Zest Bistro isn’t as packed as other restaurants during brunch. For starters their menu is a bit too simple. It doesn’t feature anything I would consider a signature dish for a restaurant, but instead, is filled with a bunch of items I could make from the comfort of my own home for much less. Their lack of a bottomless option for beverages might also be a culprit. While I enjoy my sparkling beverages, there was no way I was going to order more than one Crimson Fizz at that price. The food scene in the city is amazing, and you have to stand out to to get noticed. Zest Bistro plays it safe. Being safe isn’t necessarily a bad thing, but safe doesn’t get you a packed restaurant during prime brunching hours. I would still recommend the Zest Bistro, especially if you don’t have the time or patience to wait for a table at another restaurant.