Here’s the dish. I’ve been dragging my feet on writing this post, because quite frankly, I don’t want to do it. I knew the time would come when I would have to do it, but I didn’t think it would be this soon. I have to dish on a not so pleasurable restaurant experience.

A few Sundays ago (told you I’ve been dragging my feet on this), I joined a group of friends from DC Metro Church for brunch at Rustico on Slaters Lane in Alexandria (827 Slaters Lane, Alexandria, VA 22314). When I lived in McLean, I passed this restaurant every Sunday on my way to church and was always curious about their food. They have a great patio, which is always bustling in warmer months. I was excited to finally get the chance to check it out.

Upon entering the door, I fell in love with their eclectic style in decor. They have a featured mosaic tile wall that incorporated dinnerware and wine bottles, and I thought it was the coolest thing ever. They continue the mosaic theme in the bathrooms, as well. As I waited for others in my group to arrive, I checked out their menu. 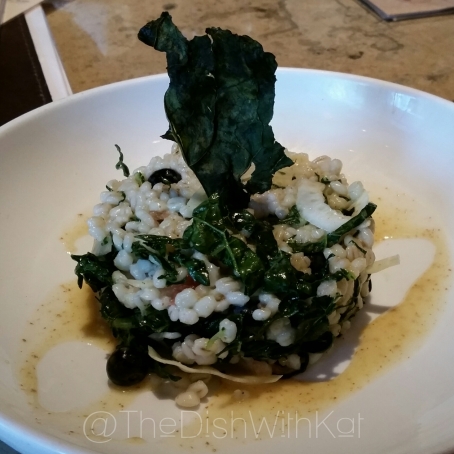 The Cheese & Herb Risotto “Tots” are served with a lemon thyme aioli.

The powered sugar and cinnamon sugar Rustico Doughnuts are served with seasonal preserves and chocolate sauce.

Brunch is pretty much my 5th food group, so as you can imagine, I was ecstatic to eat. After being seated, a few of us ordered some starters. I debated between the half portions of the Salt Roasted Beet Salad ($6) and the The Market Salad ($7) and eventually ordered the Market Salad, which features Lacinato kale, barley, blueberries, fennel, grapefruit, orange supremes, and a vanilla coriander vinaigrette. I was underwhelmed at the first bite. Because this salad listed kale as the first ingredient on the menu, I assumed it would be a leafy salad that featured all of the other ingredients. It was, in fact, a barley salad with rationed out portions of the other ingredients. Quite frankly, I’ve made more tasty grain salads with Blue Apron. I ordered it because I love grapefruit, fennel, and blueberries, and I’ve grown fond of Lacinato kale through Blue Apron recipes. There was literally one grapefruit segment, maybe three blueberries, and a sliver or two of fennel. The vanilla coriander vinaigrette was also another feature that initially drew me to the salad. I was eager to experience the warm notes of vanilla paired with the bright flavors of coriander, but again, the vinaigrette completely underwhelmed me; I could barely even taste it past the overwhelming taste of flavorless barley. Others ordered the Rustico Doughnuts ($8) and the Cheese & Herb Risotto “Tots” ($6). While both were more flavorful than my salad, I wasn’t blown away by either when I tasted them.

When it came to choosing an entree, I was torn. I initially thought I would order the quiche, but after hearing that the featured quiche that day was a Cheesesteak Quiche ($13), I quickly decided against that (and I’m glad I did). Being the southern belle that I am, I gravitated towards the Shrimp & Grits ($14), which feature cheesy stone ground white grits, spicy Conecuh sausage (or Alabama gold, as I like to call it), wilted greens, and caramelized onions. Now, I always hesitate before ordering grits in the D.C. area because I’m from the south. People up here do the absolute most with grits, when in reality, all they need are water, salt, butter (and more butter), and cheese. I asked our server Kelly so many questions about the grits: “Are they thick or thinner?” “Can you stand a spoon up in them?” “Are they cheesy?” “What is the shrimp to grits ratio?” Can you tell that I’m particular about my grits? She assured me they were on the thicker side, but very cheesy and very tasty, so I decided to be adventurous and ordered them. Now, while I wasn’t impressed by the grits that I interrogated our server about, I was impressed with the shrimp, which were grilled to perfection, and the wilted greens, which was again, Lacinato kale. The grilled shrimp was a pleasant surprise. Most shrimp and grits I’ve had featured pan seared shrimp or shrimp smothered in some sort of gravy featuring sausage. Grilling them gave the dish an unexpected flavor layer. The wilted greens did the same while also adding some substance to the the dish, which was on the smaller side for a portion (about a spoonful of girts and five shrimp). They weren’t the best shrimp and grits I’ve had, but they weren’t the worst. 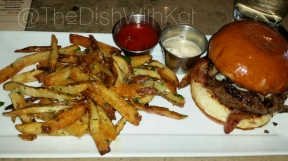 The B’ Burger piles on Maytag blue cheese, bacon, sautéed mushrooms, caramelized onion, and is served with fries.

The lazily stuffed Banana Stuffed French Toast is crusted with Cornflakes and topped with powdered sugar and maple syrup. 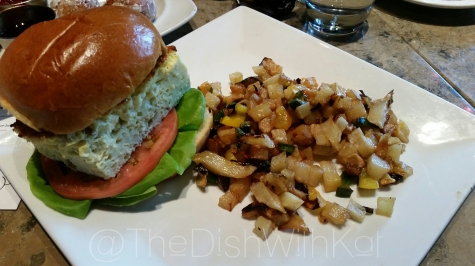 The Breakfast Sandwich stacks up Italian sausage scramble and cheddar cheese on a brioche bun, served with a side of hash.

Among the group, our orders varied from traditional brunch offerings to classic lunch dishes.  I think if I returned (everyone deserves a second chance), I’d go for a lunch dish like a burger or pizza.

If I had to choose one word to sum up my experience at Rustico and the quality of their food, I’d choose mediocre. Additionally, I believe their food is overpriced. With tax and included gratuity (because of our party size), I spent $31 on a meal that didn’t blow me away. I don’t mind spending obscene amounts of money on good food, but for $31, I could’ve gone to Trader Joe’s and brought ingredients to make a more spectacular meal.

I don’t know about you, but I need a vacation, or better yet, a baecation! One of my favorite things to do is explore a destination’s culture through their food. From street food to more upscale restaurants, you can learn so much about the history and culture of your destination through its food.
With Valentine’s Day right around the corner, I’m sure you are all in search of great date night spots to celebrate with your significant others or friends! North Italia in Foggy Bottom is a great option for your Valentine or a Galentine’s Day outing. The food, service, and ambiance are all impeccable, so you won’t be disappointed! I recently visited with my girlfriends, and we dined on Crispy Calamari ($17.50), White Truffle Garlic Bread ($15.50), Little Gem Caesar Salad ($15), Strozzapreti ($22), Braised Short Rib Lumache ($23), Chicken Parmesan ($25), Spicy Rigatoni Vodka ($23), Seasonal Butter Cake ($11), Bombolini ($11), and Hazelnut Torta ($11).
The menu from my #DinnerWithFriends in Atlanta was extensive! We dined on Cornish Hens, Candied Yams, Squash Casserole, Macaroni & Cheese, Cabbage, Collard Greens, Pinto Beans, Succotash, Green Beans, and Baked Cod (not pictured).
Being home for the holidays always gives me the recharge I need to start the new year. A dear friend’s mother recently hosted us for a delicious home cooked meal. Together, we celebrated her birthday, the accomplishments of our friend group, as well as set some intentions for the upcoming year. With a burning bowl ceremony, we gathered as a community to literally burn the things we wish to leave in 2022 and not carry into the new year. I am grateful for the community, the fellowship, the accountability, and, of course, the delicious food!
My girlfriends and I endured the parking garage and crowds at Ponce City Market for a post-Christmas meet up. There, we dined at the Italian restaurant, @bellinaalimentari. They offer casual dining and full service options for guests. We ordered at the counter and enjoyed:
Yardbird is one of my favorite restaurants in DC. I often recommend it to folks and go often myself. Here are a few of my favorite menu items they serve, some of which are seasonal.
My favorite weekend activity is definitely #brunch! I finally visited @smokeandmirrorsrooftop in Navy Yard to see what all the hype is about. They have a very limited brunch menu compared to other places, but in all honesty, you don’t go there for the food. You go there for the #views! Smoke & Mirrors is definitely an excellent spot to people watch and take in some amazing views of the Capitol and D.C. I went earlier in the fall, but their all-weather rooftop patio can be enjoyed year-round.
This week, my colleagues and I had our 16th annual White Elephant Gift Exchange & Luncheon at Al Dente in DC. We had a blast reconnecting at what is a busy time of year for us all. And food always tastes better with good fellowship!
Weekends are for brunchin’, and brunch with waterfront views is top tier! Did you know Mi Vida has a family-style brunch for $28 per person?! We dined on Salsa and Guacamole with Chips, Shrimp Ceviche, Oranges with Tajin, Chicken Enchiladas with Black Beans and Rice, French Toast with Flambé Bananas, and Churros! Be sure to check them out at the Wharf for water views or on 14th Street for city views!
Before heading to the opera last weekend, my friends and I enjoyed a quick dinner at Bangkok Joe’s in Georgetown! Here’s what we had:
I recently celebrated my birthday at El Cielo (@elcielowashington), a Michelin star restaurant in NOMA. My friends and I embarked upon The Journey, a 13-course tasting menu taking you on a culinary tour of modern Colombian food. I love tasting menu experiences for special occasions, because they are often one-of-a-kind dining experiences.
I'm dishing about my #SundayFunday @walrusoysterandale @nationalharbor!