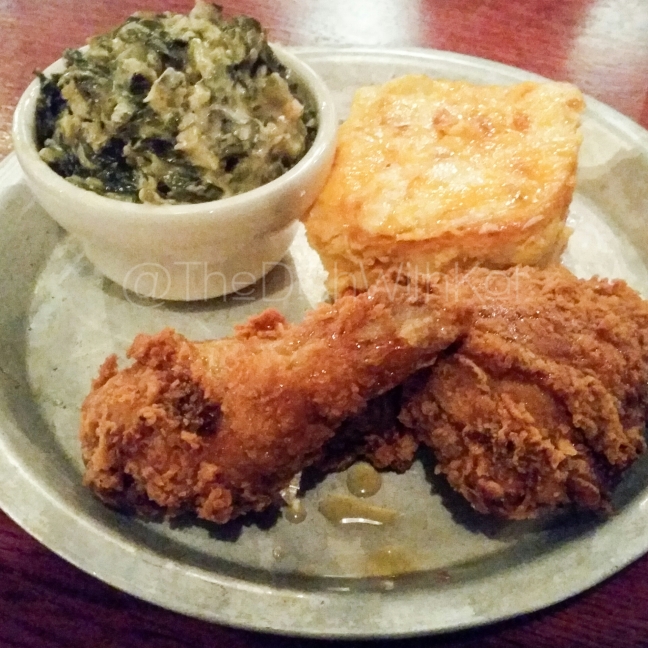 Here’s the dish! This past weekend, I traveled to Raleigh, N.C. for @NaturallyFashionable’s inaugural Blog with Kim Live workshop. There, I would meet up with some of my Blogger Baes from Atlanta—Kay from RunWay with Kay, Lisa from Unapologetically Lisa, and Je’Mia, who will soon be launching her blog about all the happenings in and around Atlanta. I arrived in Raleigh around 6:00 p.m. (right on schedule), and checked into the hotel to get ready for dinner. About 30 minutes into my routine, Kay texted me to let me know they were just leaving Gaffney, S.C. (about 3.5 hours away) and to proceed with dinner sans them. It turns out, they ended up taking the scenic route, which included a stop at an outlet mall (insert strong side eye).

Before we hit the road, I scoured Yelp and sent the ladies four restaurant options to choose from. Of those four options, I asked a previous co-worker, who now lives in Durham, about the choices, and he recommended Beasley’s Chicken + Honey. So I finished getting ready and hit the town for my solo exploration of the city and its food.

All great southern restaurants should serve Cheerwine and use mason jars as glasses! 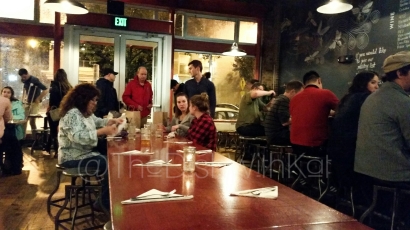 A table for one is perfect when it’s a community table.

When I arrived at Beasley’s (located at 237 S. Wilmington Street, Raleigh, NC 27601), I asked for a table for one. There were no regular tables available, so the host asked me if the community table would be okay. I agreed and found a seat at the long table that stretched from one end of the restaurant to the other. Most would think being surrounded by strangers in an unfamiliar city might be a bit overwhelming, but I reveled at the idea of enjoying my dining experience surrounded by people I didn’t know.

After I settled in, I was soon approached by my server for the night, Jeff. As he placed a mason jar full ice cold water down for me, he asked if there was anything else I would like to drink. Because I’m not a big drinker, and many of Beasley’s cocktails contained dark liquor, I opted for a good ol’ fashion Cheerwine. Now some of you might be wondering what Cheerwine is. Contrary to its name, it’s actually a non-alcoholic beverage—a cherry-flavored soda to be exact. Straight out of Salisbury, N.C. and dubbed the “Nectar of North Caroloina,” Cheerwine has been a staple in southern households since its creation in 1917. I don’t drink much sodas these days, but when there’s Cheerwine, I make an exception.

Beasley’s Bar with drink and appetizer menus written in chalk 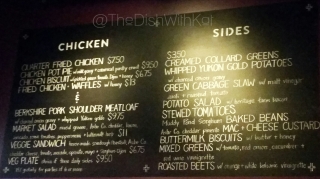 As I waited for Jeff to return with my Cheerwine, I began perusing their menu. Unlike most establishments, Beasley’s doesn’t have regular, hand-held menus. Instead its drink and food menu are etched on the chalkboard-paint-covered walls. I loved this non-traditional approach. I was beginning to notice the small details to set the atmosphere up for an evening of southern hospitality.

When Jeff returned with my Cheerwine, I took a big gulp of it before letting him know I wanted to start with the Fried Shrimp ($9.50), which include eight perfectly fried jumbo shrimp served with a delicious smoky tomato remoulade. Jeff went to put that order in while I continued to ponder over what I would order for dinner.

Beasley’s menu is a la carte—you can order chicken and other hearty entrees, individual sides for $3.50 each, or create your own veggie plate with three sides for $9.50. I ended up ordering a Quarter Fried Chicken ($7.50) with dark meat, Creamed Collard Greens ($3.50), and the Ashe Co. Pimento Mac & Cheese Custard ($3.50).

When I saw Jeff come out of the kitchen with my plate, I was like a kid on Christmas morning. Jeff was nice enough to indulge me and all my questions about my dinner. It turns out that Beasley’s double fries its chicken. They marinate the chicken in a special brine overnight. Then it spends some time hanging out in buttermilk before being dredged in mixture of flour, salt, and pepper. The initial fry is done beforehand in a pressure cooker. Once ordered, they fry it until it’s perfectly crispy and golden brown. Then they drizzle it with Be Blessed Pure Honey, a local honey purveyor. The Ashe Co. Pimento Mac & Cheese was gluttonously delicious. The cheddar used was from yet another purveyor local to North Carolina, and the pimentos added just enough sweetness to take this traditional southern dish to the next level in flavor. And I felt extra special because I was served a corner piece; we all know corner pieces are the best! The meatless Creamed Collard Greens were an interesting twist on one of my favorite southern staples. Braised in apple cider vinegar, Beasley’s adds a béchamel sauce to the greens. It reminded me of the broccoli, rice, and cheese casserole we all grew up with—just with collards. After I asked a few times, Jeff assured me there was no cheese added to the sauce, which was incredible to me because it had such a rich and creamy flavor. Again, putting a special touch on the experience with the little details, Beasley’s served this delicious meal in an aluminum pie tin. I smiled when I realized it because it reminded me of my maternal grandmother, who was one of my first culinary influences.

It turned out that a solo night on the town was just what I needed. I’m glad I ended up at Beasley’s because, even though I was a party of one, I never felt alone. Thanks for showing me your southern hospitality!